Hello friends, since throwback Thursday #TBT seems to be a thing we decided to jump on the bandwagon! In the mid 2000’s Reuben Cronje and I wrote a series of articles called Top 8 for the Luckshack which at the time was the preeminent Magic content resource in South Africa. We discussed various events and topics in the Magic world and while cleaning up an old hard drive I stumbled across a series we did in 2009 where we ranked the best creatures in magic history, my first thought was that it was pretty cringe worthy but at the same time reasonably entertaining.

(This was written pre the original Zendikar and some of the winners would have been displaced since, where relevant I will update the winner at the end of the article.) Keraan Top 8 is back!… its been a while, and some of you may be waiting with bated breath (alternatively, with baited breath, which would be weird) for the second half of a nationals 2008 article that never came. The short answer is: it was Keraan’s fault. The long answer is: dude, it was Keraan’s fault.

So, welcome to a new series of articles that will be detailing the best ever creatures in Magic’s history at each mana cost and each colour. This series will be part nostalgia, part history, part completely unjustified opinion and part careful analysis. The idea for this came from my and Keraan’s favourite lunchtime conversation topic. What is the best ever red one drop? Which logically leads to the conclusion that we should spend hours trawling through Magic Workstation trying to find a green six drop worth mentioning, a black seven drop that ever saw play, or whether there actually is a multi-coloured 15 drop (there is.)

Of course, the next obvious question is… Megan Fox’s left breast or right breast? Because having seen the slow-mo scenes in Transformers 2, I can assure you that each has a distinct personality. The second next most obvious question is… how do we go about judging the best creature at any given colour/cost?

The first criterion obviously has to be playability. This leads to a problem though, for which I have to break playability down into 2 categories:

Some cards are clearly good because of their power in a vacuum. A classic example would be Loxodon Hierach. He doesn’t need anything else to be good, he just is; he’s got the (raw) power.

On the other hand, we have cards that are perhaps less broken intrinsically but that are fantastic enablers or in combination with one/several other cards. This is where a guy like Cloud of Faeries comes to the party. He is pretty much pants if used as intended, but in a deck full of degenerate multi-mana producing lands, he is more broken than a plate at a Greek party.

We haven’t specifically favoured one type of power over the other. After all, the very point of Magic is to search for synergy between your cards so it would be unfair to prejudice a card because it only works well in concert with the London Philharmonic. That said, it might hurt a card if it was only ever good in a single deck in a single format in a single metagame.

In a sense, having a proven track record is more of a tie-breaker than a full on criterion on its own. Good cards tend to see play, so most cards worthy of consideration will have been multi-format all stars. In a couple of cases, we have had to pick between very strong contenders and the fact that a card has proven itself not once, but a second or third time might tip the scales in its favour. Other times, a card that is super good in principle has seen virtually no real world play (*cough* Silvos Rogue Elemental *cough*) and this counts against it.

This is actually more of a sub-category of the above. Cards that have gone that extra mile and had the prestige of being in a deck that won Worlds get a little extra credit. This is, legitimately, why Merfolk of the Pearl Trident (don’t bother looking it up, it’s a 1/1 for one) nearly scooped blue one drop, if only he’d won instead of being a losing finalist.

Also, having been banned gives some major street cred. If your bad-assery was enough to get you on the DCI’s most wanted, if you were good enough to warp a format, then that has to count for something.

Taking One Small Step for Mana, One Giant Leap…

Some cards look pretty wimpy now, yet were powerhouses of their day. They may look ordinary now, but at one point they changed the way we play or were a complete revolution in Magic terms. This category covers the Jackal Pups and Frenetic Efreets of the world; the Orcish Artilleries and Phyrexian Colossi. Having been something really special and game changing in their time goes a long way to helping a card win the prize. This also includes the consideration of creature creep… whereby recent years have seen increasingly more potent creatures being printed, to the point where a 4 mana 5/5 uncounterable who makes his friends uncounterable too, is unplayable. So if two cards are equally positioned, the older card got a slight bonus to take this escalation into account.

On to the picks…

This one was pretty tough, as you would expect. There are many good choices. The debate eventually boiled down to Mother of Runes versus Ramosian Sergeant. I fought hard for the Serg’s inevitable avalanche of card advantage, and Keraan countered with the Mother’s sheer versatility and long history of service; plus the term “Smother your Mother” was at one point a regular occurrence in extended season.

And the winner is… Mother of Runes by a whisker, honourable mention Ramosian Sergeant 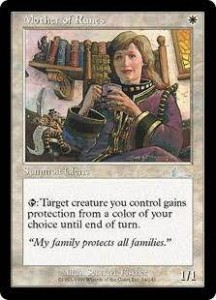 Keraan’s first list simply stated “it doesn’t exist.” Flying men and Merfolk of the Pearl Trident were serious candidates. The final pick, however, went to a limited powerhouse who should really have seen a bit of constructed play at some point.

And the winner is… Stormscape Apprentice* 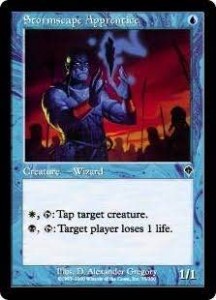 Some decent candidates here. Putrid Imp was a great enabler for more than one deck. He would be the poor man’s Wild Mongrel if the dog was worth more than, say, R2. Okay, so he’s the car guard’s Wild Mongrel. Carnophage struck fear into the heart and Disciple of the Vault is perhaps one of the most hated cards ever to see print (and it was originally printed as an artifact deck hoser… true story.) This was one occasion where synergy and the “ban” factor trumped pure power.

And the Winner is… Disciple of the Vault 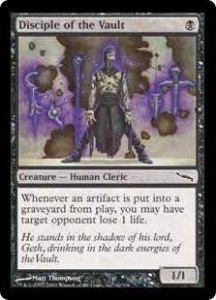 The one that started it all. The number of brilliant candidates here is staggering: Kird Ape is barely a footnote. Of the five finalists, Mogg Fanatic eventually fell due to the effect of the new rules changes, which was like anti-Viagra for Mr. Fantastic. Jackal Pup, in truth, is no longer a pup. It’s now more like your old dog when it goes blind and begins to lose bladder control. And Grim Lavamancer got some seriously hideous alternate art for his judge foil. That left behind two cards that are so degenerate that I actually feel a twinge of guilt when I play them on turn one against an unsuspecting opponent. These two are inseparable and they both continue to fuel some of the most heinous plays that a 60 card deck can produce.

And the Winners are (it’s a tie!)… Goblin Lackey and Goblin Welder 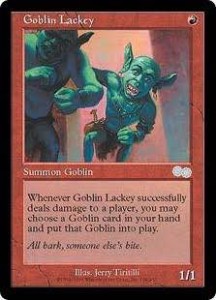 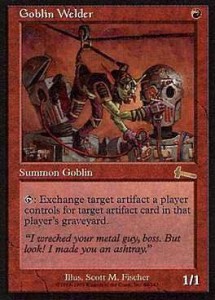 This used to be a shootout between Llanowar Elves and Birds of Paradise. Then you’d realise that, if it went to Llanowar Elves, you’d have to give it to Fyndhorn Elves as well (since they’re identical) and thus it always had to be Birds. And then along came Noble Hierach. As good as the Hierach is though, the Bird does still tap for rainbow. The exalted is marginally better than flying. The tiebreaker ended up being the fact that one of them has a track record longer than several Bibles stapled together. (I do want to give a special word to Elvish Lyrist for being one of the few cards able to keep Necro in check.)

And the Winner is… Birds of Paradise 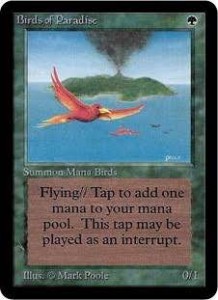 As hard as I tried to seriously consider if Tattermunge Maniac or, I dunno, Steamhopper or something might have a shout here, there is only once choice. 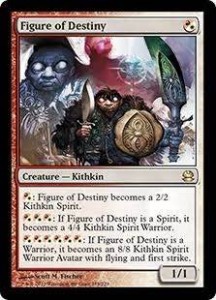 As much as I loathed seeing turn one Seat of the Synod, play Arcbound Worker… the winner here is the ultimate synergy card and is the long time lover of Illusionary Mask, although it was recently seen having a three way affair with Trickbind and Stifle (and Stifle’s mom? Who knows.)

And the Winner is… Phyrexian Dreadnought 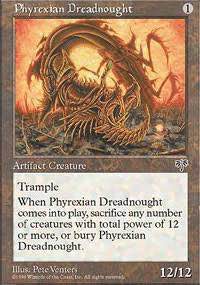 That’s all folks. In the next instalment will be two drops and three drops. Find out who wins the green two drop category… only Gambit’s domestic help has seen a wider array of broken cards! Be amazed as a hippo card you’ve probably never heard of storms into contention! There may even be more talk of boobs!

As stated previously blue essentially had no previous one drops, that is until Delver of Secrets was released. A turn 1 Delver followed by a flurry of counter magic is/was often impossible to overcome. The multi format constructed King was dominant in Standard and has proved to be an excellent card to build around in both Modern and Legacy. in a sense Caw Blade revolutionized Standard by showing us the power of utilising mana efficiently from T1…Delver took the blue print to the next level!

And the winner is… Delver of Secrets* 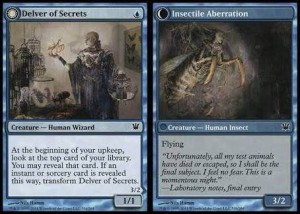